When planning my units and lessons I often create what I call “Game Sheets” to help me remember what, how and why I taught certain games within my classes. These Games Sheets are easy to follow one page documents which contain all the information I could possibly need to set up, teach and assess a game in my class. As my collection grew over the years, and teachers/coaches began to ask me how to make the way they teach games more meaningful, I thought it was time I shared these Game Sheets with the world.

The database is a collection of quality games designed to make it easy for you to plan and teach your lessons. Each month members will gain access to 5 new printable game sheets, a game video as well as access to the existing database (currently 45+ games). The games included in the database are based upon some of the most common game categories currently being taught in physical education programs worldwide, including the  Teaching Games for Understanding categories of Target Games, Net & Wall Games, Striking & Fielding Games, Invasion Games.  Each game has been designed to focus on specific skill or tactical concepts. Members will be able to use the games in the database to teach units within these game categories, assisting their students to develop technical and tactical understanding. One of the best features of the database is the ability to filter games and narrow your search. You can filter games by category or by tactical problem. 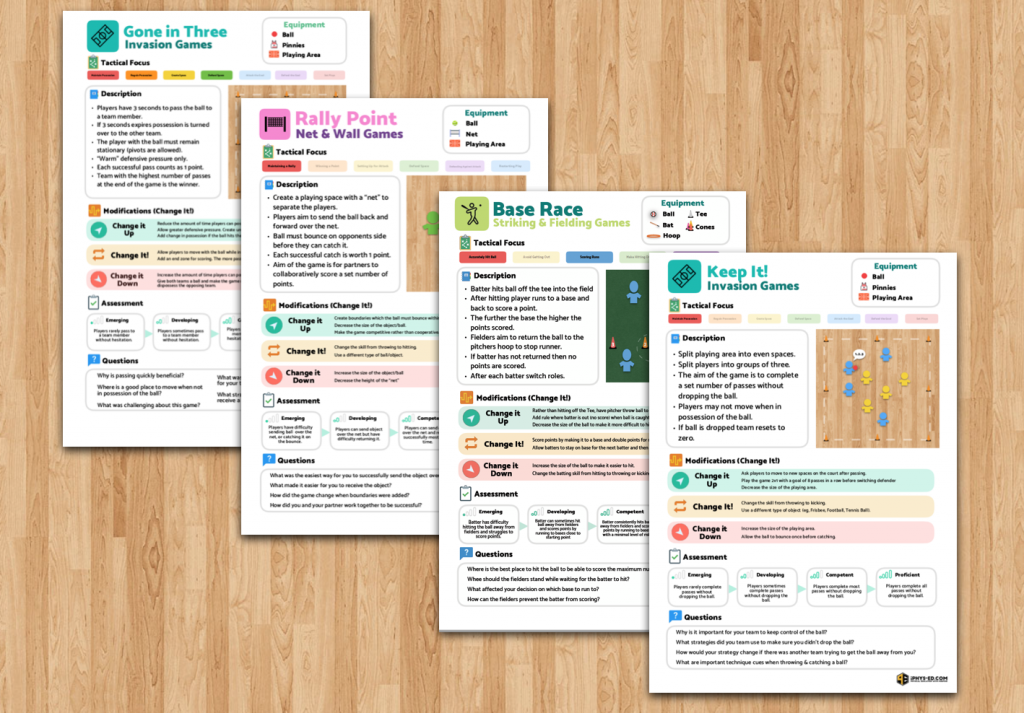 Each game sheet, regardless of game category, contains the same basic structure allowing you to set up, play and then question/assess your students. The Game Sheets consist of:

Below I have included a Game Sheet example of one of my students favourite games, which I will break down to show you how easy they are to use.

Bench Ball is a modified invasion game which shares similar skills and tactical problems with many other team sports and is a very common game played during invasion games units in gyms all around the world.

Equipment
This section provides you with suggestions on how the game can be played with a minimal amount of equipment. For Bench Ball all you need is a ball, some pinnies/bibs to identify the teams and some benches/chairs.

Tactical Focus
This section identifies the tactical problems which students will be exposed to when playing this game. In Bench Ball players will be required to develop the skills to Maintain Possession, Regain Possession, Create Space, Defend Space, Attack the Goal and Defend the Goal.

Game Description
This section describes the basic rules needed to play the game. For Bench Ball students are split into two teams, with the aim of the game being to pass the ball to player standing on a bench on the opposite side of the playing area.

Change It Up – The game is too easy. Modifications will increase the difficulty of the game.

Change It – The game is too one-sided. Modifications will change the game to increase participation.

Change it Down – The game is too difficult. Modifications will decrease the difficulty of the game.

❓ Questions
This section includes some key questions that can be asked to players before, during and after gameplay to encourage critical thinking, reflection and discussion.

To compliment the game sheets there is also a collection of Game Videos which describe and show the game in action. Each month we choose one of the games and a game video to the database. Below you can watch the Bench Ball game video to give you an idea of what to expect.

At this stage you are probably wondering how you get access to the full database and it’s growing collection of games sheets and videos?

Access to the full Purposeful Games Database is not available as part of The PhysEd Library. You can access. Each and every month new Game Sheets are added to the database, giving you new fresh games to play in your classes.

Once you have subscribed you will receive your login details via email and then you will be ready to sign in and start accessing the games.

If you have any further questions about the Purposeful Games Database please do not hesitate to reach out to me via email or social media. Looking forward to you joining us as a member of The PhysEd Library.